The History and Science of Snacking

How we became a snacking nation, and what to do about it.

American history includes a heaping serving of entrepreneurship and innovation. And calories — particularly in the 20th century, as technology advancements have made food more accessible, convenient, cheaper and more ubiquitous. This universal availability and convenience has encouraged us to eat more. And the more we eat, the more food manufacturers make. The snack food industry grows at 2.8% a year, with the USA leading the pack in growth. Americans eat roughly 570 calories more per day than they did in the 1970s, which includes 22 teaspoons of sugar a day. While we do supersize meals, snacking claims the bigger portion of these calories.

Americans eat roughly 570 calories more per day than they did in the 1970s, which includes 22 teaspoons of sugar a day. Click To Tweet

We used to be a 3-meals-a-day country. Particularly before World War II, the norm was to eat breakfast, lunch and dinner/supper, with perhaps a coffee break if you worked outside the home. Convenience foods didn’t exist to the degree they do now.

Today, one-third of all calories consumed in the USA are in the snack category — a category which barely existed before World War II. Foods like pretzels and popcorn are hundreds of years old, but it wasn’t until the 1900s that food producers began creating shelf-stable packaged food that was just for fun, with an explosion of growth beginning in the mid-1940s.

In this article, we’ll discuss how we got here, the toll on our health, and what to do about it.

How we got here

Walk into a drug store today, and you’ll find the pharmacist only after passing row after row of snack food aisles. Enter a gas station and you’ll likely wade through a thicket of packaged foods and candy. Why does a pharmacy or a gas station need to sell snacks? A time-traveler from 1970 would not recognize these modern environments. What happened? 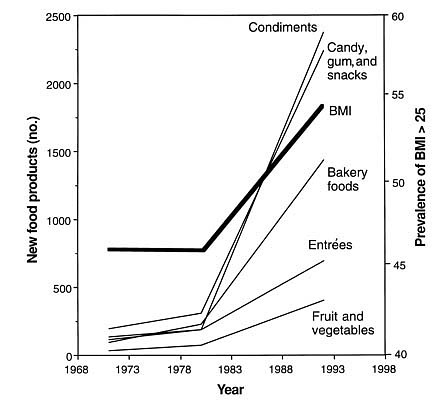 One could credit the industrialization of flour mills in the 1820s with the launch of the junk food era. But really the prime factors in making food-in-a-wrapper acceptable to consumers was a combination of war and marketing.

The war on fresh food

War is a driver of innovation. In the early 1800s, Napoleon and the British Navy were waging a technology war, trying to find ways to preserve food to feed soldiers in the field and on the ocean. England won the first food battle, when the world’s first commercial canning factory opened in London, producing canned goods for the royal navy in 1813. The technology spread rapidly, allowing foods that would quickly spoil in this pre-refrigeration era to last for years.

American Civil War soldiers in the 1860s became accustomed to eating from cans and jars. They came home acclimated to these new preserved and convenient foods.

Food preservation grew during World War I, and exploded during World War II, as countries across the globe needed to safely move food to feed their troops. Before these wars, soldiers relied on hard-tack biscuits and salted meats. Canning allowed soldiers to carry ready-to-eat meat into battle, and tinned full-meal rations were supplied to World War II fighters. Hard dry chocolate (and cigarettes) were always included in meal kits, and M&Ms were invented in 1941 to provide more-convenient yet still melt-resistant chocolate to soldiers. Tootsie Rolls were also popular with the troops.

General Foods created Maxwell House instant coffee, a product supplied to soldiers and ultimately introduced to the public in 1945 as the war wound down. This is an example of foods created for the battlefield being marketed to civilians after the war.
After each war, marketing experts tried to convince home cooks they were too busy, and needed these new modern convenience foods to manage their modern lives.

The rise of the machines

In addition to mechanized food production, modern vending machines appeared in Britain in the 1880s, and the United States in 1888. Now they are ubiquitous thanks to an army of MBAs paid to find all the “point-of-thirst” locations, as well as public spots where someone might be frustrated, bored, or otherwise looking for a sweet or salty distraction.

As industrialization spread, and farmers moved to cities to work in factories, food vendors parked their carts outside of the large factory gates, offering the first “fast foods” to hungry workers on their microscopic lunch breaks. This began to train us that food did not need to come from our own kitchens.

An army of MBAs finds all the “point-of-thirst” locations, as well as public spots where someone might be frustrated, bored, or otherwise looking for a sweet or salty distraction. Click To Tweet

Beginning in the 1920s, food manufacturers paid for charmingly patronizing stories in women’s magazines that taught supposedly harried homemakers how to cook from cans to save time, how to make entrees out of Jell-o, and to get creative with boxed cake mix. Home cooks were resistant at first, but the brands had time and money on their side. This was a multi-generational war. They were patient and persistent. The space race began, television entered the homes, the pace of life increased, we became more comfortable with technology, and the children of the 30s became the homemakers of the 50s. By the 1960s, food manufacturers were winning. Women were entering the workforce, and whether they were liberated or merely overworked, they began to take advantage of this parade of new food products.

As late as the 1980s there were about 7,000 items in a typical grocery store. Now it’s 50,000, and the total number of packaged food varieties was 320,000 at last count. Because basic ingredients are multipurpose, but packaged pre-cooked foods are specific, and differentiation drives market share.

Moving out of the kitchen and into the streets, our love affair with cars and suburbanization also plays a role. Drive-thru windows began as a novelty in California, but became an institution during the 1980s. Now you don’t even need to walk to the counter to order your pre-cooked food. You can eat it with one hand and drive with the other — while speaking hands-free on your conference call.

As sugary breakfast cereals and other treats were marketed directly to kids in the 50s, these kids grew up to be more comfortable with manufactured foods, which influenced how they fed their own children starting in the 70s. Coffee used to be black — or light and sweet if you wanted an indulgence. Now it can be an addictive 300-calorie dessert in a cup. Food science has advanced to the point of technicians manipulating the crystal structure of salt grains, and customizing the sound and mouthfeel of crunchy snacks.

Consider Cheetos, which are designed to both crunch and melt in your mouth. This trick is called vanishing caloric density. Your brain relies on mouthfeel and chewing to know you’re consuming calories. A solid food you don’t actually chew fools the brain into eating more.

Many snacks are designed to both crunch and melt in your mouth. This is called vanishing caloric density. A solid food you don’t actually chew fools the brain into eating more. Click To Tweet

The brain has evolved to prioritize high-calorie foods over low, in case famine comes tomorrow. Of course in today’s world, famine never comes, but we are still designed to subconsciously prefer a food with a higher caloric load.

What America snacks on: 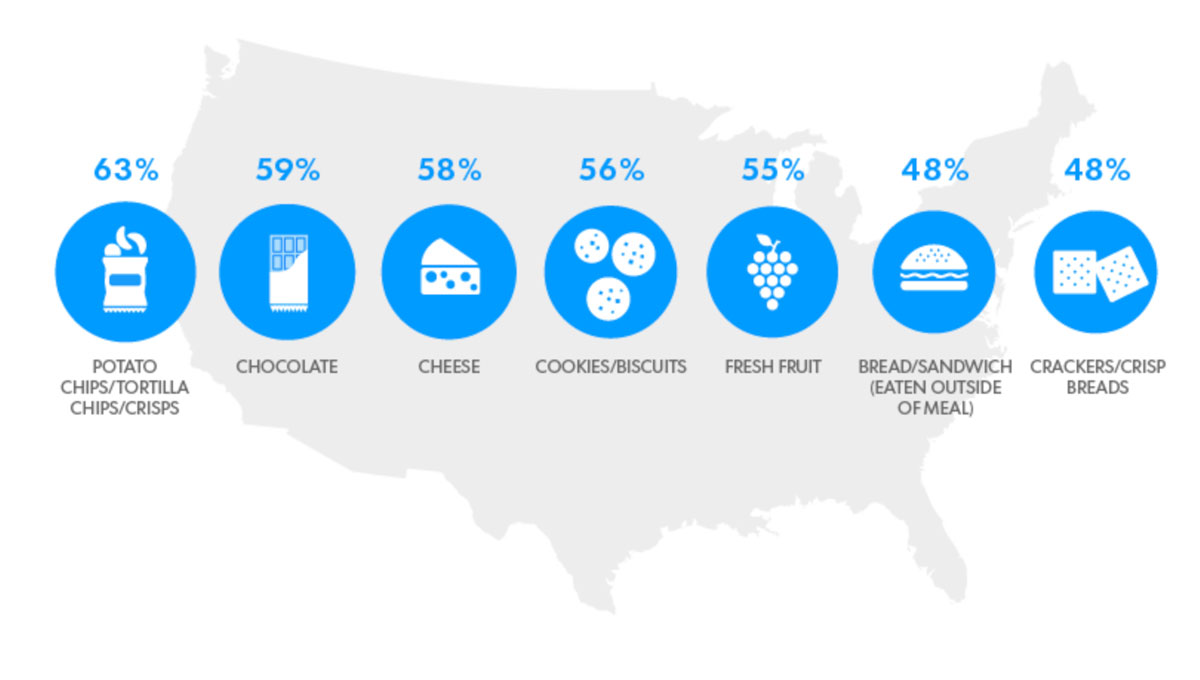 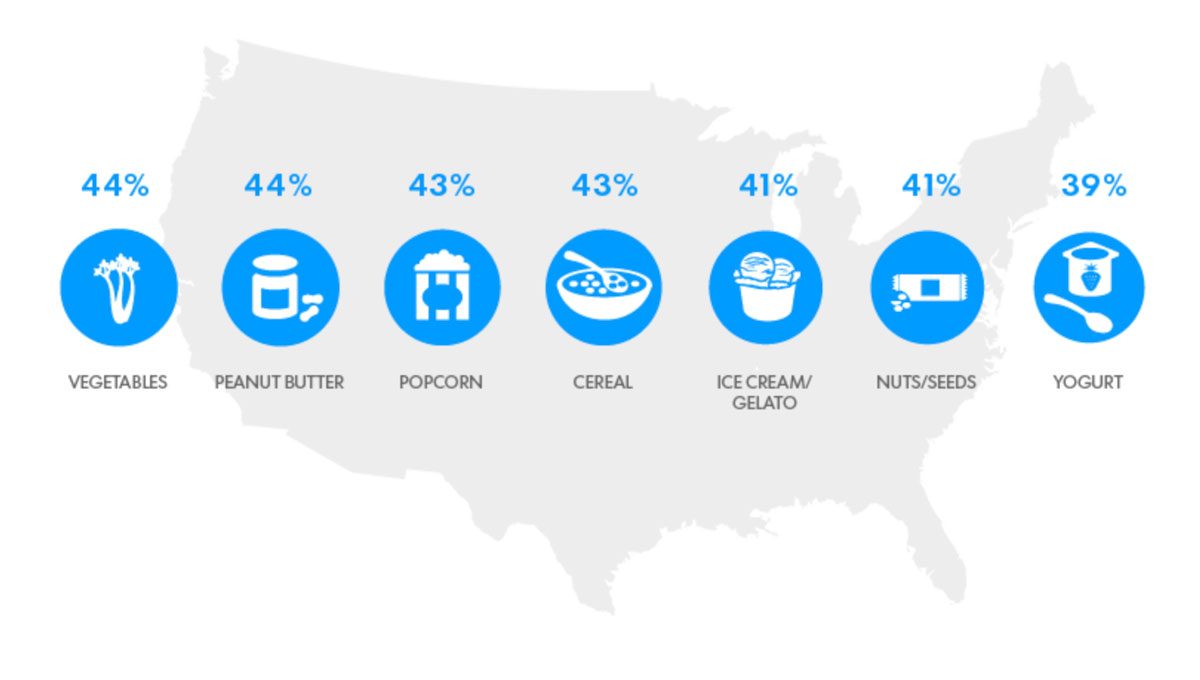 Processing food is not necessarily bad. Without processing and packaging, we would not have perfectly roasted fresh coffee beans, or gourmet chocolate, or flash-frozen vegetables, fish and meat that reduce waste and provide year-round availability.

But once you have given up cooking, discerning the difference between a solid meal from a box and a dubious snack becomes difficult, or irrelevant. And if that snack carries a powerful payload of sugar, salt, fat, and flavor, along with an addictive crunch, it can issue an irresistible siren’s call.

Today, we are sleeping less and snacking more, eating our way through the day to deal with fatigue and stress. We eat breakfast on the go, choosing one-handed meals and energy bars to help us multitask.

Snacking is a way to deal with hunger, yet it creates more hunger by perpetuating blood sugar surges and crashes. Each post-snack crash prompts more snacking to recover from the dips that occur an hour or two after the last snack.

This snack-crash-snack cycling helps explain the need for energy bars and energy drinks to recover from the dips caused by the last snack in a constant effort to regain an elusive sense of satiety. If you don’t train your body to know when mealtime is, then mealtime will be all the time. Your body clock won’t know when proper mealtime is if it is not acclimated to a routine. People who succeed at long term weight loss keep a regular meal rhythm, which helps them manage their hunger and plan healthy meals.

If you don’t train your body to know when mealtime is, then mealtime will be all the time. Click To Tweet

A study published in Cell Metabolism helps illuminate this situation. The researchers found subjects consumed more calories after 6 p.m. (37.5%) than at breakfast or lunch, including 12.2% of their daily calories after 9 p.m. They also ate at different times on weekends vs during the week, which confuses the body clock. Subjects were eating more than 14 hours in each 24 hour day. When subjects were asked to restrict their eating to an 11-hour window (effectively cutting out eating after dinner time), they lost weight, slept better, and reported having more energy during the day.

Your digestive system needs rest and recovery time. It was not designed for late-night eating. Going to bed with food in your stomach can exacerbate acid reflux and interfere with sleep. Ideally, we should stop eating at least 4 hours prior to bedtime so your system can empty the stomach and the small intestine, which allows it to clean and repair the stomach lining and intestinal walls while you sleep.

What to do — snacking scientifically

We know that weight gain, snacking, and sugary and fatty foods increase inflammation and metabolic diseases, move us towards diabetes, raise cholesterol, and counter-intuitively, reduce energy.

On the other hand, if you’re trying to eat healthfully and reduce calories, then controlling hunger will help you resist temptation and avoid overeating. The trick is to snack on high-volume, low-calorie foods that increase satiety with fewer calories.

iDiet recommends two small, healthy snacks each day as part of our plan. We find it’s easier to stick to a plan that’s more like your normal eating patterns. Since we’re used to snacking, iDiet makes the snacks work for you, not against you. Our snacks help to keep your blood sugars stable and to prevent willpower-sapping hunger from sneaking in. We believe the closer our plans conform to habits and practices you are used to, the easier they will be to follow. The brain craves not just specific flavors, but also specific actions. If you’re used to snacking, it’s a big request to ask you to give snacking up cold-turkey. So we don’t. We have a list of foods you can eat any time, as often as you need to.

If you’re not in an iDiet program, then pay attention to how often you eat each day, and try to limit snacking to healthy foods like cut vegetables, and only those cases where it would help you avoid overeating something bad. You can also resolve to eat at the same times each day, and to limit or eliminate eating after dinner, which helps remove excess calories from your day.

Learn more about our programs here.

Something from the Oven: Reinventing Dinner in 1950s America, Laura Shapiro

Choose Your Program
We respect your privacy and will not rent, sell, or give your information to any third party.